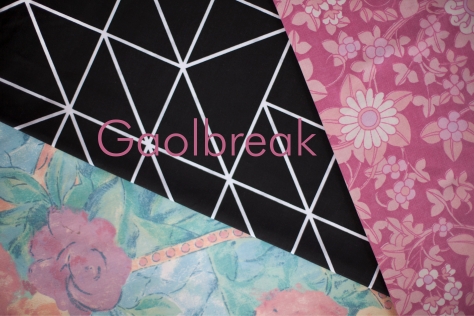 In November 1923, prisoners held at Cork City Women’s Gaol launched an escape attempt. Tying together bed sheets to construct a rope ladder, the prisoners descended from the walls of the prison and made their bid for freedom. In Gaolbreak, Cork-based artist Angela Fulcher draws on this history to create a large scale fabric installation in the atrium of Cork City Hall. Knotted lengths of bedding fall from the building’s balconies, obliquely referencing this story of revolt in recognition of Ireland’s Decade of Commemorations. Fulcher brings to bear her fascination with the world of consumer-driven textile design, using contemporary items from low-cost suppliers like Michael Guineys and Penneys. Using sometimes kitsch, heavily patterned material, Fulcher looks beyond the garish to consider prospective connections between everyday devalued materials and their extraordinary potentials.

This project builds on Fulcher’s substantial body of work which has led to growing recognition of her practice. Paying close attention to the details and qualities of materials and surfaces, Fulcher explores the contexts and philosophies associated found materials. Her intelligent and subtle subversions touch on the histories and politics of manufacturing, fashion and obsolescence, the vagaries of taste and the realm of traditional feminine making. Fulcher takes a unique approach to sculpture. Her recent practice has involved creating large-scale, temporary textile sculptures that engage their environment: Sun Stopping at VISUAL, Carlow (2016) reflected on its site, creating striking interventions outside the gallery; Vermiculated Render Quoins to Ground Floor (2016) at the Engage Festival Bandon echoed the patterns on the Allin centre’s walls, translating them into textile sculptures of heavily patterned upholstery fabric and red pleather. Creating surprising, intelligent and witty works of art, Fulcher scrutinizes our everyday environment, picking out derided artefacts in order to consider their implications.

Catalogue with essay by Prof. Jessica Hemmings, Professor of Crafts & Vice-Prefekt of Research at the Academy of Design & Crafts (HDK), University of Gothenburg, Sweden.

Funded by Cork City Council. Angela  Fulcher is a recipient of the Next Generation Bursary Award 2016, a special initiative of the Arts Council and the Ireland 2016 Centenary Programme, in recognition of the role of artists in the events of 1916.